California is leading the way on greenhouse gas emissions reductions to avoid the worst consequences of climate change, but no matter how quickly we reduce our polluting emissions, climate impacts will still occur. Many impacts – increased fires, floods, severe storms and heat waves – are occurring already and will only become more frequent and more dangerous. However, there are many things we can do to protect against climate impacts. Taking steps now to adapt to climate change will protect public health and safety, our economy and our future.

The Safeguarding California Plan: 2018 Update is the State’s roadmap for everything state agencies are doing and will do to protect communities, infrastructure, services, and the natural environment from climate change impacts.  This holistic strategy primarily covers state agencies’ programmatic and policy responses across different policy areas, but it also discusses the ongoing related work to with coordinated local and regional adaptation action and developments in climate impact science.

Find out more about the State’s integrated climate change adaptation strategy by exploring the following pages:

The Safeguarding California Plan: 2018 Update – California’s Climate Adaptation Strategy builds on nearly a decade of adaptation strategies to communicate current and needed actions state government should take to build climate change resiliency.  It identifies hundreds of ongoing actions and next steps state agencies are taking to safeguard Californians from climate impacts within a framework of 81 policy principles and recommendations. With over 300 revisions made to reflect hundreds of comments received during the public comment period, the 2018 update also has two new chapters and incorporates a feature showcasing the many linkages among policy areas. A new “Climate Justice” chapter highlights how equity is woven throughout the entire plan. 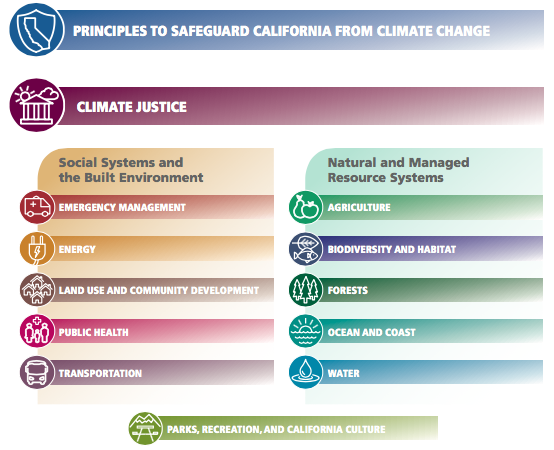 California state government is taking action to safeguard people, infrastructure, and the natural environment from the impacts of climate change.  The report Safeguarding California In Action: Climate Change Adaptation Examples from State Agencies details 33 examples of projects and programs that show how state agencies are investing and taking action to increase resilience to climate change around California. Individual profiles from the compilation can be found below, as well.

The Natural Resources Agency is proud to host and highlight these important projects showing how state agencies are making a difference on the ground.  To find more case studies of climate change adaptation in California, please visit the Adaptation Clearinghouse, which serves as a centralized source of climate adaptation resources in California.

Over 300 individuals provided comments on the May draft version of Safeguarding California through 10 public workshops and 5 tribal workshops across the state. 36 letters representing individuals, groups, and advocacy coalitions provided hundreds of additional notes. These letters led to over 300 edits to the May Draft incorporated into the final Plan.

We are sharing these informal responses as part of our ongoing effort to make Safeguarding California transparent and accountable. Many responses allude to the necessity of ongoing conversation and further needed changes, and should not be interpreted as the final or official position of state agencies.

A summary of public comments, agency responses, and resulting edits listed by chapter can be found here.

We express our deep gratitude to all the Californians whose thoughtful comments, feedback, and expertise helped improve this plan.

Find the full 2016 Safeguarding Implementation Action Plans, including an Executive Summary, here. Each of the ten sector plans in the report can be found individually below.